Last night, I joined Chris and his friend Alex at ‘Ino, a little Italian cafe and wine bar in the West Village. I’d been wanting to go for months, and my expectations were definitely met. A couple glasses of Sangiovese plus delicious Tuscan white bean soup and a caponata-and-goat-cheese bruschetta totally hit the spot. 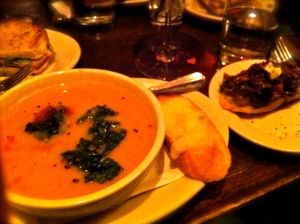 As a New Yorker, you walk a lot just going to and from places. Sometimes in the winter it can be kind of rough, but when you keep in mind all the health benefits of walking, it actually feels like an added bonus rather than a drag. For example, a new study shows that walking 10,000 steps a day may reduce diabetes risk much more than simply 3,000 steps a day.

Something else I think of a lot when walking through New York in the cold (especially after some wine) is this story about a chef who went down with the Titanic. Though he bobbed around in the near-freezing water for a few hours before being rescued, all the alcohol in his bloodstream kept him nice and toasty. That has less to do with nutrition, though, and more to do with my bizarre fascination with lost ocean liners.

I hope everyone has a nice weekend planned.